From WikiHood
Jump to navigationJump to search 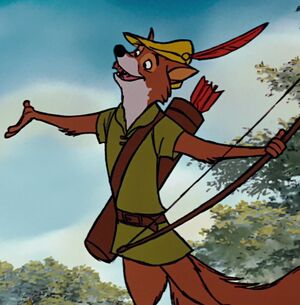 Robin Hood is a character in the 1973 animated Disney film Robin Hood based on the legendary tales. He was voiced by Brian Bedford, with whistling and humming by Pete Renaday.

About Robin[edit source | hide | hide all]

Robin is a fox and a master archer. He lives in Sherwood Forest with his band of Merry Men. They are outlaws who oppose Prince John, who rules the country while his brother, King Richard, is away. Prince John's cruel and excessive tax collection leaves his citizens without any money to buy food. Robin and his men rob from the rich, usually the prince himself, and give the money to the poor.

He is in love with Maid Marian, who lives in the castle with her servant, Lady Kluck. They were childhood sweethearts, but had not seen each other in years.

Retrieved from "https://hoodwiki.xyz/w/index.php?title=Robin_Hood_(character)&oldid=1729"
Categories:
Cookies help us deliver our services. By using our services, you agree to our use of cookies.