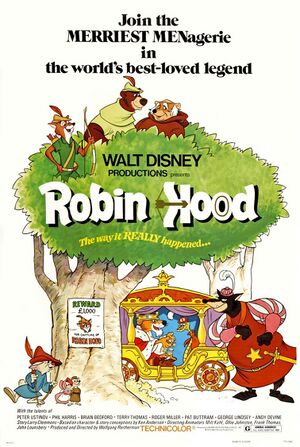 Not to be confused with the 1952 Film

Alan-a-Dale introduces the story of Robin Hood and Little John, two outlaws living in the Sherwood Forest. They rob from the rich and give to the poor townsfolk of Nottingham, despite the efforts of the Sheriff of Nottingham to stop them.

Prince John and his assistant Sir Hiss arrive in Nottingham on a tour of the kingdom. Knowing the royal coach is laden with riches, Robin and Little John rob Prince John by disguising themselves as fortune tellers. The embarrassed Prince John then puts a bounty on their heads and makes the Sheriff his personal tax collector. The Sheriff takes pleasure in collecting funds from the townsfolk, including hidden money from the crippled blacksmith Otto and a single farthing from a young rabbit, Skippy, who had just received it as a birthday present. However, Robin Hood, disguised as a beggar, sneaks in and gives back some money to the family, as well as his hat and a bow to Skippy in honor of his birthday.

Skippy, his two sisters and Skippy's friend Toby test out the bow, but Skippy fires an arrow into the grounds of Maid Marian's castle. The children sneak inside, meeting Maid Marian and her attendant Lady Kluck. Skippy "rescues" Marian from Lady Kluck, who pretends to be a pompous Prince John. Later, when she is alone with Kluck, Maid Marian reveals she and Robin were childhood sweethearts, but they have not seen one another for years; Kluck consoles her not to give up on her love for Robin.

Meanwhile, Friar Tuck visits Robin and Little John, explaining that Prince John is hosting an archery tournament, and the winner will receive a kiss from Maid Marian. Robin decides to participate in the tournament disguised as a stork, whilst Little John disguises himself as the Duke of Chutney to get near Prince John. Robin wins the tournament, but Prince John exposes him and has him arrested for execution despite Maid Marian's pleas. Little John threatens Prince John in order to release Robin, which leads to a fight between Prince John's soldiers and the townsfolk, all of whom escape to Sherwood Forest.

As Robin and Maid Marian fall in love again, the townsfolk have a troubadour festival spoofing Prince John, describing him as the "Phony King of England," and the song soon becomes popular with John's soldiers. Enraged by the insult, Prince John triples the taxes, imprisoning most of the townsfolk who cannot pay. A paltry coin gets deposited into the poor box at Friar Tuck's church, which gets seized by the Sheriff. Enraged that government has meddled in his church, Friar Tuck lashes out at the Sheriff, for which he is quickly arrested. Prince John orders Friar Tuck hung, knowing Robin Hood will come out of hiding to rescue his friend.

Robin and Little John learn of the plot and sneak in during the night. Little John frees all of the prisoners while Robin steals Prince John's tax money with a makeshift ropeway conveyor. Sir Hiss awakens to find Robin fleeing. Chaos follows as Robin and the others try to escape to Sherwood Forest. The Sheriff corners Robin after he is forced to return to rescue Tagalong, Skippy's little sister. During the chase, Prince John's castle catches fire and Robin jumps into the moat, where he is seemingly skewered by the soldiers' arrows. Little John and Skippy fear Robin is lost, but he surfaces safely after using a reed as a breathing tube. Later, King Richard returns to England, placing his brother, Sir Hiss, and the Sheriff under arrest and allowing his niece Maid Marian to marry Robin Hood.

The football music played in the background while Lady Kluck fights off Prince John's soldiers following the archery tournament is an arrangement of "Fight On" and "On, Wisconsin", the respective fight songs of the University of Southern California and the University of Wisconsin.

Two records of the film were made at the time of its release in 1973 which included its songs, score, narration, and dialogue. The first uses Roger Miller's narration, while the second is narrated by Billy Whitaker as Skippy. Both "Oo-De-Lally" and "Love" appear on the CD collection, Classic Disney: 60 Years of Musical Magic. The full soundtrack of the film was released 4 August 2017 as part of the Walt Disney Records: The Legacy Collection series on compact disc and digital.[1]

The song "Love" is featured in the 2009 feature film Fantastic Mr. Fox.[2] The song "Whistle-Stop" was sped up and used in the Hampster Dance, one of the earliest internet memes,[3] and later used at normal speed in the Super Bowl XLVIII commercial for T-Mobile. The song "Oo De Lally" is featured in a 2015 commercial for Android which shows animals of different species playing together.

The film has been adapted in whole or in part into a number of books. Further adventures have been published in comic books.

Retrieved from "https://hoodwiki.xyz/w/index.php?title=Robin_Hood_(1973_film)&oldid=1933"
Category:
Cookies help us deliver our services. By using our services, you agree to our use of cookies.